In the morning we left K8’s house, then we went back to the hostel. When we arrived in the hostel everyone had enough free time to go shopping or to go to the beach.
For dinner we went to an Italian restaurant which was called “Buco di Beppo”. We all had an awesome dinner with pasta, chicken and a lot more to chose from. Everyone enjoyed it and after this the teamers had a big surprise for us. We all went bowling. That was a lot of fun 🙂
After this we were all tired and we went directly to bed. This was our last night in Los Angeles!!!

The next day we left the hostel very early. After driving for 5 hours and having lunch at Subway we finally arrived in Las Vegas. So it was time to say goodbye to Kate, Jes and Tucker. Everyone was very sad and many of us cried 🙁

Then we checked in and went into the plane.

All in all it was a great vacation and a really wonderful experience.
We’ll never forget this time and we hope that we will meet again soon!

Written by Maria and Kevin 🙂


Today we went to Hurricane Harbor, we had free time for the whole day there.
Hurricane Harbor is a waterpark with many slides and a lot of pools and everything you need to enjoy when it’s really good weather like today.
There were many awesome slides and at the beginning the waiting time wasn’t so long.
Later we had to wait long but it still was alright. But there was also a beautiful beach and a very nice pool with waves. We also were just laying at the pool in the sun and enjoyed the very very nice weather.
After that we met at the entrance to go to the mall. Then we went to the mall for shopping, it was a lot of fun and I really enjoyed it!
For dinner we will have mac & cheese with corn on the cob now.

It was a great day which is ending now 🙂

Written by the awesome Johannes 🙂
Edited by the equally awesome Tucker :)))


Yesterday we went to a really big roller coaster park which is called magic mountain. There are about 15 great roller coasters and we had a lot of fun.
It was awesome, a roller coaster named superman accelerate to 160km/h* backwards and went then 90 degree to the top ; at x2 we were hanging in the seats and while the coaster was turning the seats turned themselves again ; in the roller coaster batman we drove through fog and around lupins -> crazy! And tomorrow we’re going to hurricane harbor!!!


We started on Wednesday and we went by ship to an island called Catalina Island. When we arrived we had a “little” walk of 30 minutes then we set up our tents. In the evening we had a nice BBQ.
The next morning we had to get up very early. After a little breakfast we went to a snorkeling trip. It was very cool because we saw a lot of fish and plants. In the afternoon some of us played mini golf. At the evening we had a scaventure hunt. The dinner was pasta and everyone enjoyed it
After the last night we packed our stuff and went to the harbor, then we left the island with the Catalina Express.
It was a really funny but unfortunately the time on the island was too short!


Went to Venice beach and the Getty museum today. Will be off to Catalina Island tomorrow for two nights. We probably won’t have internet access there, but we’ll post some more pictures and blogs as soon as we get back.

Best wishes from the English in Motion family!<


Science museum today!
Starting a day with some knowledge about science is nearly perfect. And of course we had fun at the museum trying all these science things and the different computers. Highlight of the science museum: Hubble space telescope – a 3D movie about some astronauts fixing the telescope. The movie was such an impressive way to give us some information on their job and how big the space is!
But the best comes after learning: fun in the batting cage! After Tuck explained how to play baseball we had so much fun trying to doing a good job – awesome day to that point. And what’s better than science museum and playing baseball? Watching the pros themselves play baseball. A pro game starting so boring that you want to get away turning into an exciting game being explained by a family from Cologne! And suddenly everyone started talking German. German students in front of us, German students behind us, plus the family from Cologne -> so much fun! And after great 8 innings we had to leave ’cause we didn’t want to get stuck in traffic; so unfortunately we didn’t see the end of the game 🙁

Greetings from EiM after such an exhausting day 😉

7am wake up call by Tuck: “we’re going to church guys, hurry up!” And so we did, a group of 23 people sitting in the church, who did not know what’s going on, BUT: it was awesome! Old lady started singing and we still didn’t know what’s going on. After a few performances we were so excited what’s happening next, that we nearly missed the 1 hour speech of the reverend, he was talking a long, long time about one thing: god is in us and: we should use our potential for our needs. At the end of his talk, he mentioned that some guys from Germany are here and Kate told 200 people in 2 sentences who we are: English in Motion! They we’re so nice and friendly, every one of them! They were really happy to have us there. After giving some donations, it all came to an end. And we went back to the hostel and got some free time to hang out and get breakfast at Mc to the Donalds !

After lunch we went to Coco’s aunt and we were doing some gymnastics and having some fun in the gymnastic hall.

After work we went to a place where some people have been waiting for something like a concert. None of us expected much but after our pizza we were ready to rumble! Waiting for the concert we had a lot of fun but not that much like at the concert. The group came out and we really did not know what’s gonna happen! But after a few songs we knew what to do: “get up stand up, get up for your right!” we’ve been dancing in first row and the whole place knew us as the German kids having fun in the first line and dancing to the twist ! It was really great and we had a lot of fun down there!!! But everything ended and so the great show ended with talking to the musicians of the band and driving back to youth hostel, Santa Monica !

By the way, Jes took the wrong way, but with the help of an awesome unknown helper (jonas), she finally found the way to gymnastics and the way home to bed. 😉

Greetings from America from Jonas H. (and Heinzelmännchen) 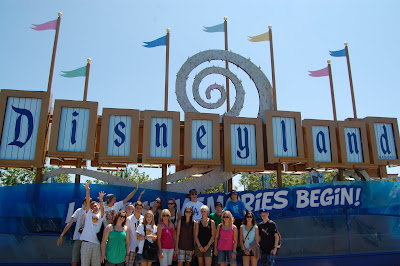 Yesterday it was a fantastic day. After getting up and having breakfast, we drove to Disneyland. After parking in a really huge parking structure (second biggest in the world), we drove with a train to the main entrance of Disneyland where we’ve taken a picture in front of the Disneyland sign. Then we went in and walked to the first ride, we took together. Disneyland is built like a little town. In the middle of everything, there is the Disney castle. Our first attraction was called “Pirates of the Caribbean”, where we must wait about half an our, which is a short waiting time in Disneyland.

Till 6 o’clock we had free time to do every attraction in the park. Our most favorite roller coaster was the space mountain coaster. It was roller coaster in the dark with space animations around you. At about 9.30 pm there was an amazing firework with music. Then we drove back to the hostel, where we arrived at about midnight.


Today was a pretty great day because we went to Hollywood and it was Tucker’s 21st birthday.The beginning of this day was really relaxed some of us went shopping and the others chilled at the beach. Finally, at 12:30 pm we started our way to the Hollywood Hills! On the way we had a break at Tar Pit, at this place archaeologists still find fossils but the main attraction was a man with his banjo. While he was playing a song we danced to his music it was funny.

Our next stop was Beverly Hills where we walked along the Rodeo Drive which is the second most expensive shopping street in the world. After dreaming of Gucci and Dolce&Gabbana we were at the Beverly Hills sign and took a group picture in front of it.

Everyone was so exited about seeing Hollywood, after a short drive up to the hills we found the best view to take pictures. WE ARE IN HOLLYWOOD! It’s just an amazing feeling – but I’m afraid we haven’t seen a star yet… All in all it was a fantastic and a powerful day. 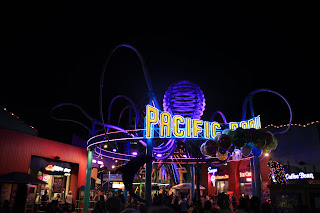 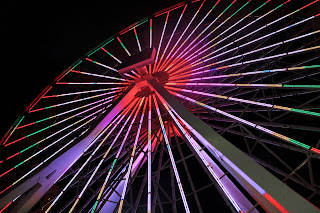 Last night we’ve visited the pier in Santa Monica. At the pier there are many attractions such as the rollercoaster, ferris wheel and other rides. We had a lot of free time there and enjoyed the awesome view of the beach and Los Angeles. In the end we walked back home and we were all very tired. We were all looking forward to Tucker’s birthday the next day.
Another great day had come to an end.